Career Story: From Finance to Marketing with a Test and Measure Approach

Career Story: From Finance to Marketing with a Test and Measure Approach

Transitioning from a position in finance to one in marketing is not exactly a linear move. 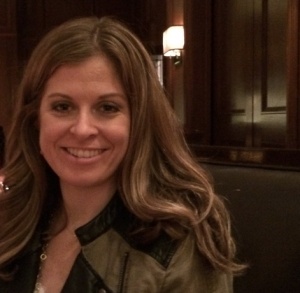 For Nicole Emerick, an Agile Careerist featured in my book, Activate Your Agile Career, making the switch from one industry to another was a daring reinvention – one aided by a common practice in lean product testing, test and measure.

A Degree in Finance

Heading into college, Nicole’s father, a serial entrepreneur, advised her to get a degree in finance. His logic? “If you know money, you can do anything.”

True statement. She earned her degree in finance.

She graduated from college and started working eighteen months before the Global Financial Crisis of 2008. Nicole performed her duties brilliantly at a major bank and was skilled at building relevant business relationships.

But something wasn’t right.

She could tell by looking at herself in photos that even her smile was fading. Envisioning herself in banking one more year, much less five to ten years, seemed like a nightmare.

As someone with a flair for the creative and trendspotter eye, she yearned for a collaborative environment where her clever eye for trends and ideas would flourish. 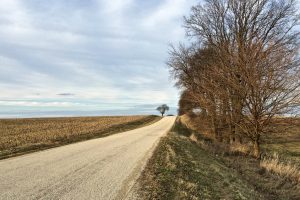 When you turn left at the road of safe instead of at the road of desire, the crossroads image can haunt you during times of discontent and searing disappointment. Like a photograph worn with reminiscence, Nicole continued to think; she hungered for her road not traveled.

Test and Measure to Discover Purpose

Marketing was Nicole’s first love, so she used her time in the evenings to learn digital marketing skills through online courses from Silicon Valley University. While still working at the bank, she studied everything about the digital marketing space and realized online social media was going to be hot.

As a trendspotter, she could tell by her instincts that each new social platform and emerging job description for a social media strategist meant it was time for a career course correction.

Her part-time testing approach enabled her to pursue it in parallel, while working full-time at her finance job. 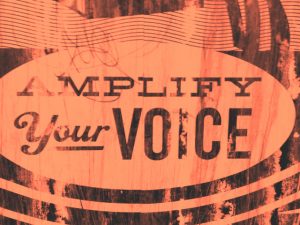 She began blogging about her journey as a twenty-something young woman struggling with finding a job, switching industries, and finding happiness. The content struck a nerve with an audience of her peers, millennial women. As a relatable, credible spokesperson, Nicole discovered her own voice, while giving a voice to young women trying to figure out their place in the work world.

Nicole’s blog attracted hundreds of subscribers, thousands of community members, and eventually sponsors and advertisers. The blog was not only an outlet for her creative ideas, creating an intoxicating momentum that fueled her focus, but also a meaningful source of income. Nicole expanded her offerings to include live events for career women, while establishing alliances with resume writers and other career service providers.

The creative content hub of activity provided Nicole a strong sense of purpose, giving her the confidence to land her first marketing role the following year. She sold her website business, and is now a VP, Director of Social Media at one of the world’s largest global advertising agencies.

Like headline A/B testing methods used by email marketers to influence consumers to open an email campaign, Nicole tested career roles, all the while asking “do I like this role? Do I prefer another type of job?” 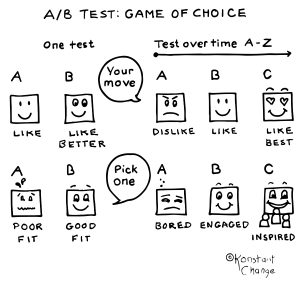 The test is simple. After you experienced more than one role, either on the side or in sequence:

The test is scalable through many letters of the alphabet!

There is an Agile Marketing expression by Jascha Kaykas-Wolff, a leading technology marketer: Don’t be afraid to fail, but don’t fail the same way twice. The point is to encourage risk and creativity, but learn from your mistakes. This sage advice regarding alternating between experience and test cycles applies to the agile career in the form of A/B tests.

An agile mindset incorporates incremental change over big risky moves. The nimble careerist hedges her bets by exploring the landscape on the side, while holding down a job and pulling in the steady paycheck.

Nicole is an agile careerist who has a knack for pursuing a side hustle while working her main job. She embraced the “test and measure” approach to career building, responded to change, and made strategic moves at just the right time.

To learn more about how to make your strategic move, download the Career Agility Guide, 7 Actions: How to Activate Your Agile Career.

If you’re considering your own test and measure approach, or you are well on your way to choosing what’s best for you, subscribe to Marti’s 52 Ideas. For more details on career agility, check it out here.

Marti Konstant is a workplace futurist with an agile mindset. She is a career growth analyst, author, speaker, personal brand architect, and founder of the Agile Careerist Project™. What started out as a quest to fine-tune her evolving career sparked a research project, a book, and workshops, where future of work and career agility are central themes.